Not Far From Brideshead: Oxford Between the Wars

Oxford thought it was at war. And then it was.

After the horrors of the First World War, Oxford looked like an Arcadia. Soldiers arrived with pictures of the university fully formed in their heads, and women finally won the right to earn degrees. Freedom meant reading beneath the spires and punting down the river with champagne picnics. But all was not quite as it seemed.

Boys fresh from school settled into lecture rooms alongside men who had returned from the trenches with the beginnings of shellshock. It was displacing to be surrounded by aristocrats who liked nothing better than to burn furniture from each other’s rooms on the college quads for kicks. The women of Oxford still faced a battle to emerge from their shadows. And among the dons a major conflict was beginning to brew.

Set in the world that Evelyn Waugh immortalised in Brideshead Revisited, this is a true and often funny story of the thriving of knowledge and spirit of fun and foreboding that characterised Oxford between the two world wars. One of the protagonists of this classicist’s portrait of the university city, in fact, is Maurice Bowra, a friend of Waugh who inspired a character in his novel. Another married into the family who inhabited Castle Howard and befriended everyone from George Bernard Shaw to Virginia Woolf. E. R. Dodds, meanwhile, was an Irish occultist and correspondent with the poets W. H. Auden, Louis MacNeice and W. B. Yeats.

This singular tale of Oxford colleagues and rivals encapsulates the false sense of security that developed across the country in the inter-war years. With the rise of Hitler and the Third Reich came the subversion of history for propaganda. In academic Oxford, the fight was on not only to preserve the past from the hands of the Nazis, but also to triumph, one don over another, as they became embroiled in a war of their own. 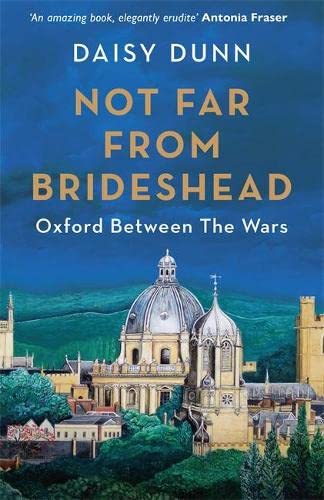 Reviews of Not Far From Brideshead

Naturally the subject is one which will always interest me, having known all these people as “the grown ups” in my youth, but that aside it seems to me an amazing book, elegantly erudite. ― Antonia Fraser

Daisy Dunn’s fascinating portrayal of academic Oxford in the first half of the 20th century is profoundly perceptive, frequently funny, and remarkably well written. Focussed mainly on the world of classical scholarship, she provides a lucid account of the professional and private lives of such remarkable figures as, among others, Gilbert Murray, Maurice Bowra, T.S. Eliot and Louis MacNeice, all depicted with an exceptional understanding not only of the characters themselves but the eccentric world which they inhabited. ― Selina Hastings, author of Evelyn Waugh: A Biography

A work of mature and meticulous scholarship that weaves a compelling picture of Oxford at a time when the world was turned on its head, but the university soldiered on, tolerating eccentricity and nurturing greatness. ― Charles Spencer, author of The White Ship

The wide galère of interwar Oxford, with its High Table malice and wit, forbidden lust, and occasionally noble political convictions is encapsulating. For all the funny anecdotes and Brideheadian overtones of the era, sometimes decisions taken there had lethal consequences. The interaction of Dunn’s three eccentric yet somehow emblematic Classics dons – Bowra, Murray and Dodds – stay in the mind long after the last page. This sparkling and fascinating book confirms the fact that Daisy Dunn’s historical capacity reaches far beyond the Ancient World. ― Andrew Roberts, author of Churchill: Walking with Destiny

A delightful study of idiosyncratic brilliance, Daisy Dunn’s illumination of Oxford as a place of humane minds is uplifting. ― John Sutherland, author of Monica Jones, Philip Larkin and Me

Focusing on the rivalry of three classical scholars, Daisy Dunn skillfully tells the story of Oxford between the wars: a story of passion, jealousy, debate, exuberance and foreboding. ― Adam Sisman, author of John le Carré: The Biography

Echoes of Ancient Greece haunt the most eccentric of university cities in this poignant yet comic tale of hope and loss between the wars. Daisy Dunn writes with masterly control. ― Will Loxley, author of Writing in the Dark: Bloomsbury, the Blitz and Horizon Magazine

…A book about parochial things (who will be next Regius professor of Greek?) which reflects very large things – the future of Europe in the time of Fascism. It’s a look at Oxford between the wars, concentrating on three Greek scholars – Gilbert Murray, Maurice Bowra and Eric Dodds – but somehow encapsulating the 1930s, poets, ideological warfare, academic innocence. I love the way Daisy Dunn writes – A. N. Wilson, recommended summer reading in The Tablet

The prodigious research…is obvious in the detailed, elegantly told story of a city in transition…Dunn, a leading female historian…offers a vivid portrait of a place of privilege and pranks. ― The Independent

In this clever, engrossing book, Daisy Dunn sets the myth of inter-war Oxford against the reality…it is this Oxford, brave and progressive as well as decadent, spiteful and shockingly misogynistic, that Daisy Dunn brings to life in this thoughtful, compelling history – Kathryn Hughes, The Mail on Sunday

Her erudition and energy are thrillingly applied…The effect is both refreshing and inspiring, like the first glass of champagne of the day… this is a witty and deeply researched book. It is full of revelations. She writes in an authoritative and hugely readable fashion and avoids anachronistic value judgements ― The Oldie

One of the joys of Dunn’s fascinating book is her ability to control the comic tone and leaven it with sober and often moving details…Bowra’s unwittingly disastrous part in Operation Valkyrie, the thwarted plot to assassinate Hitler, is rendered brilliantly, showing Dunn’s acute abilities as a storyteller…this is an immensely readable and meticulously researched book – Paula Byrne, The Spectator (lead review)

Lucid, agile, juicy, nuanced… engrossing…The virtue of [books like this] is their brisk pen portraits, their patient explanation of ideas, and their dexterity with sources, not only the many books by their subjects, about their subjects, or both, but archival material…While Dunn brings in worldly themes such as women’s rights, war trauma, industrial action, international diplomacy, homophobia and the legacy of colonialism, she is centrally concerned with the power of the humanities, and the virtues and dangers of invoking the past – Leo Robson, New Statesman

Endlessly fascinating…this book is an absolute delight. Its strength lies in its focus on lesser-known figures over more obvious candidates. Dunn wears her serious scholarship lightly as she traces the interconnected lives of some of the finest minds of a generation – Ben Cowell OBE, BBC History Magazine

Lively and readable…the successes and failures of this queer trio are fascinating and Dunn is illuminating…The bush is thick, but she manages to cut a path that is worth treading, even to those who feel they’ve seen enough of this period. Her prose is spry and racy’ – Times Literary Supplement

‘Ambitiously, ingeniously, she tells the public history of Oxford University between the wars through the interwoven stories of these three classicists…this is a bold, thoughtful, rollicking history, with splendid set pieces. Rosalind Howard’s promotion of the Gilbert/Mary match is hilarious, and the 1936 Regius race a nail-biter’ – The Tablet