In the Shadow of Vesuvius: A Life of Pliny

Click below to order the book from your choice of retailer:

A dual biography of Pliny the Elder and Pliny the Younger and exploration through their eyes of Rome around the time of the eruption of Vesuvius.

Above the Bay of Naples, Vesuvius is spewing thick ash into the sky. The inhabitants of nearby villages stand in their doorways, eyes cast on the unknown. Pliny the Elder, a historian, admiral of the fleet, and author of an extraordinary encyclopaedia of Natural History, dares to draw closer to the phenomenon. He perishes beneath the volcano. His 17-year-old nephew, Pliny the Younger, survives.

The elder Pliny left behind an enormous compendium of knowledge, his Natural History offering observations on everything, from the moon, to elephants, to the efficacy of ground millipedes in healing ulcers. Adopted as his late uncle’s son, Pliny the Younger inherited his notebooks – his pearls of wisdom – and endeavoured to keep his memory alive. But what became of the young man after the disaster?

The book resurrects the `father and son’ to explore their beliefs about life, death and the natural world in the first century AD. It is about both the elder Pliny, who perished in the disaster, and the younger Pliny, who grew up to become a lawyer, senator, poet, collector of villas, curator of drains, and personal representative of the emperor overseas. Counting the historian Tacitus, biographer Suetonius, and poet Martial among his close friends, Pliny the Younger chronicled his experiences from the catastrophic eruption through the dark days of terror under Emperor Domitian to the gentler times of Emperor Trajan.

Interweaving the younger Pliny’s Letters with ideas and extracts from Pliny the Elder’s Natural History, Daisy Dunn brings their world back to life. Working from the original sources, she celebrates two of the greatest minds from antiquity and their influence on the world that came after them. 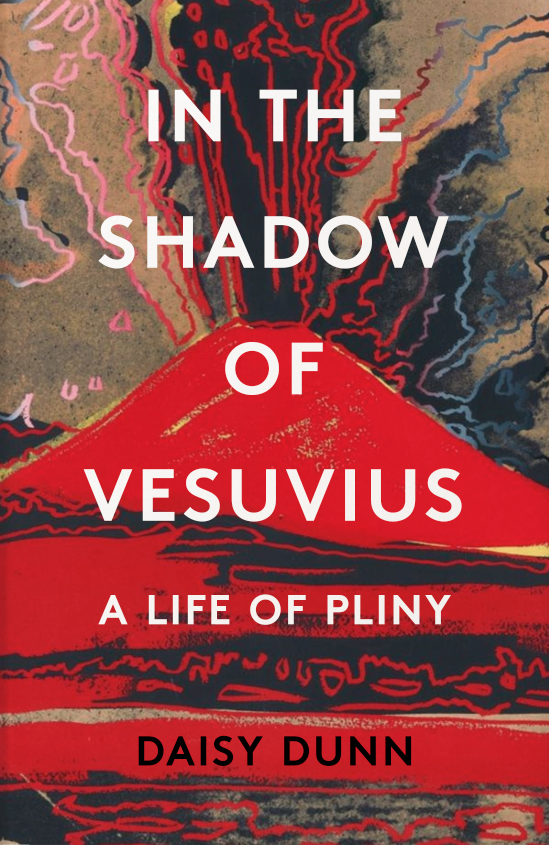 Reviews of In the Shadow of Vesuvius

‘Starts with an erupting volcano – and then gets more exciting. A wonderfully rich, witty, insightful and wide-ranging portrait of the two Plinys…and their world’ – Sarah Bakewell

‘A fascinating, compelling and excellent biography of the two great Plinys of Ancient Rome, as well as a celebration of nature, a study of literature and the human soul, and a lens into Roman society itself…’ – Simon Sebag Montefiore

‘Daisy Dunn’s book is an absolute delight. Meticulously researched and beautifully crafted, it shines a clear beam of light into the private lives of Pliny the Elder and Younger’ – Giles Milton

Five Stars (*****) ‘From this recalcitrant material, Daisy Dunn has written an enthralling and ambitious book…Dunn has a great eye for a story, and writes wonderfully…wonderful’ – The Daily Telegraph

‘That In the Shadow of Vesuvius is never less than compelling is due principally to two things. The first is the subtlety of its structure. Rather than give us a strictly chronological biography, Dunn opts instead to trace the rhythms of her subject’s year…A sophisticated structure is not the sole reason for this book’s success. Dunn also knows how to work a sentence. Without ever veering into historical fiction, she consistently succeeds in bringing what might otherwise seem dusty and remote to vivid life…The result is a portrait of the Roman Empire that gives the reader something of the shiver down the spine that Herculaneum can inspire’ – Tom Holland, Literary Review

‘Only a writer as sure-footed as Ms Dunn would even attempt such a challenge…A clever, engaging book…has much to offer readers, with its ground-up, kaleidoscopic view of a nine-decade span of Roman history’ – The Wall Street Journal

‘She succeed[s] in making Pliny…a poignant character, the kind of person who has to do the dirty jobs of an empire and, having done them, gets no compliments’ – The New Yorker

‘Dunn neatly describes the untangling of the two men’s separate stories…Her account, artfully constructed by themes of the seasons rather than direct chronology, uses the one to enliven the other’ – The TLS

‘Daisy Dunn’s account of the eruption is very fine…The admirable footnotes and bibliography are a cornucopia..this book is entirely sui generis. If you have an interest in either Pliny and their period, this is for you’ – Country Life

‘Daisy Dunn’s nuanced biography breathes new life into the younger Pliny, revealing his uncle’s scientific and philosophical influence on his own evolution into poet, magistrate, senator, curator of drains and prolific letter writer. An evocative portrait of Renaissance men before the Renaissance’ – Nature

‘Daisy Dunn is to be congratulated…judging by her work on Pliny, there can be few other Roman characters who would not come to life thanks to her discerning judgment, her eye for detail, her wide research and her lively pen’ – Catholic Herald

(Starred review) ‘A rich, entertaining dual biography of two fascinating men, a revealing portrait of ancient Rome, and a celebration of nature’ – Booklist

‘Dunn offers a comprehensive study of how the elder Pliny influenced his equally perceptive and ambitious nephew. This eloquent and accessible history offers a revealing glimpse into the daily life of ancient Rome’ – Publishers Weekly

‘The Roman Empire comes to life through the biographies of two influential men…. [Dunn] creates a vivid tapestry of the Roman world…. A sensitive, spirited investigation of the ancient world’ – Kirkus Reviews

Daisy was interviewed about the book by The Sunday Times: https://www.thetimes.co.uk/article/daisy-dunn-put-a-sexed-up-catullus-among-the-pigeons-now-its-plinys-turn-bxtgd2sgp

And by Peter Moore for Travels Through Time podcast for History Today magazine: https://www.historytoday.com/podcast/travels-through-time-12-–-daisy-dunn-ad-79